a game by Andrew Backhouse

Pencilquest is a tactical dungeon-crawl. It's solo and print-and-play. You'll select a party of 2, 3 or 4 heroes, equip them with potent abilities, and guide them through a dungeon filled with vicious monsters.

You crawl dungeons with a pencil?

Yep! Like my other games, it pushes the envelope on what can be simulated with paper and marks on it. Pencilquest is my take on dungeon-crawling. It's all-in on the medium - you draw your dudes, draw the monsters, and erase things as they die (and move).

The gameplay is tactical, grid-based combat. You plan and execute deadly combos, react effectively to elite rolls, and carefully shepherd your limited Vim pool until you reach the next Fountain, which restores all your heroes.

Those heroes have strong, role-defining class identities, which gives it a bit of an old-school MMO feeling - you want the Warrior taking most of the hits, the Priest heals well but does little else, and you're quite likely to wipe if the Rogue takes aggro.

The end of each map has an exceptionally difficult challenge which will require careful planning and skilful execution to overcome.

Each map has a push-your-luck style choice to make, in the form of Heroic Feats, which change how the map must be approached, and grant you additional success bonuses if completed.

As you unlock more hero abilities, you'll discover completely new approaches to the various challenges the maps offer. Building clever hero-ability compositions, and tailoring them to each map, is a kind of 'deck-building' meta-game on top of the tactical dungeon-crawling.

Show me the dungeons!

While simplifying a dungeon down to rooms (as opposed to tiles) is a great way to slash complexity, you lose out on the tactical puzzle of positioning your units. I really like the "where do I put my dudes?" puzzle, so Pencilquest sticks to the grid.

The systems work hard to keep full grid-based gameplay from slowing things down. They're so tight that a deep game is baked into extremely simple representations: two-stroke symbols for heroes, and numbers or single letters for monsters.

The maps are also filled with a modest spread of RPG-ish interactables: fountains, doors, levers, traps, and so on.

Each hero has a unique, Chess-like movement pattern. This makes traversing each part of the map a spatial puzzle, beyond having to get rid of the bad dudes in the way.

Abilities are your heroes' bread and butter. They mostly hurt monsters or help allies. They might cost nothing but the action spent to use them, or they could draw on your heroes' Vim (which is also what they lose when their blood is spilled). Very powerful abilities also draw on the extremely limited Nerve pool.

The easy route to balanced heroes which feel distinct is keeping customization really light. This comes at the cost of the player's creative expression, so I found it unacceptable.

I gave each hero a unique list of wildly varying abilities. From these, you select a handful to "equip" on each adventure. This means that you get to meaningfully character-build each time you play.

Hmm, what if I run the Rogue without Backstab, but with both Longbow and Shortbow? This gives her strong flexibility at range, but lowers her overall damage output a bit.

A given hero can play fairly differently from run to run, depending on how you change their abilities up, but class identity is preserved, as heroes' ability pools are designed around a flavour. Rogues have mobility and melee, single-target damage; Warriors have mitigation and melee, multi-target damage.

Finally, since you're building a party, you can exploit synergies across heroes. Want to make the Wizard a powerhouse glass cannon? Give her only vim-spender spells, and make sure your Priest is stocked up on multi-target heals!

Monsters usually behave traditionally, moving toward their target and then attacking it. They have extremely simple behaviour, selecting the closest hero as their target, which makes monster turns quick and easy.

Elite monsters make sure that encounters remain dangerous and exciting. Each elite has its own table of 6 special abilities, from buffs to other monsters in their pack to once-off powerful attacks. They roll on the table each round of combat, bringing an element of unpredictability to each fight, which you must adapt to overcome.

Hitting stuff has always made up the bulk of play-time in dungeon crawls - as it should - but I wanted to make sure I'd done all I could to make it as slick as possible. I didn't want the interesting puzzle of ability, target, and position selection to be overshadowed by hours of dice rolls and small-number maths.

I wanted more of the game, as well as more exciting tension, to land in the heroes' turn, so each offensive hero ability involves a roll. But that's all there is to it - you roll a d6 and you hit if your roll's good enough. Roll higher to hit stronger monsters. No maths!

Monster turns are less exciting for you, the player, so they're as minimalist as humanly possible. After the elite monster's roll, the non-elites attack. They do a fixed amount of damage, automatically. A 1 hits for 1, a 2 hits for 2, and so on. Non-elite monster actions take seconds.

As in Pencilvillage, gameplay happens over two US Letter sheets, which is great for portability. You still need the manual with you if you want the story which goes with the map, but it's optional.

What do you need to play?

You need a pencil, an eraser, two printed playsheets, and two six-sided dice. The manual is recommended, as it contains the story for each map. You can optionally track hero Vim with dice or tokens instead of pencil.

Is this game for me?

While this is extremely streamlined as far as moment-to-moment play goes, it remains a fairly deep tactics game and asks a lot of the player on a strategic level. If you have no experience with, or do not enjoy, complex adversarial grid-based tactics games, you will probably not enjoy this.

Like the rest of my games, Pencilquest is solo-first. You could divvy the heroes up and play in a group, but the format really lends itself to one person and a long evening with nothing else to do. Buy it if you mostly want to play it solo.

It's a fairly crunchy tactics game. It's also pretty deep on story! Each map has a narrative which describes what your party encounters at each turn. Get it if one or both of those facets really appeals to you. Despite a little more visual flair than my past games, it's not particularly pretty - it's mostly symbols drawn on a grid. Skip it that sounds off-putting.

Each hero attack and each elite action involves a die roll, but these average out given how many you're making. The game is fundamentally about making good decisions given the odds - which are all known to you up-front. Still, if a string of bad rolls really gets under your skin, you might not have fun with this.

Engagements can be punishing until you figure out how to approach them. This is not a game that will hand you victory through tenacity - it rewards thinking about the monsters' strengths and weaknesses, and testing ideas until you find an approach that works. If that sounds more tedious than exciting, this might not be the game for you.

You need to be able to draw distinguishable symbols in spaces which are about a centimetre square. If you have fine motor or vision impairments which make this difficult, this might be a bad fit. Check out the videos for clarity.

It is very difficult for me to predict your playtime in this game. I have seen enormous variance in testing. I suspect that once you understand things, short maps will take most people under an hour, but that for some people that'll stretch to two or three. It all depends on how deeply you digest your options - and taking your time isn't a bad thing! If you do play slowly, play in sessions rather than maps, and take breaks.

This falls at about the same weight as Pencilvillage in decision-complexity for its weight, which is to say you shouldn't expect the wondrous depths of Twilight Imperium, nor the breezy ease of Istanbul. It's mid-weight while being very light on materials and busy-work.

A note to the structure enthusiasts

Don't panic! City-building remains my one true love. This was a wonderful detour to see how far I could take spatial tactics in the pencil space, but I will be returning to empire-building in Game Four.

Did you do the one-page manual again?

That particular fancy has passed, to the relief of many, I'm sure. The systems are still light and elegant, but they're explained over several pages, with pictures and in a much bigger font, for ease of digestion.

Not quite your jam?

Check out my other games at Pencilgames.org and see if any of them takes your fancy. 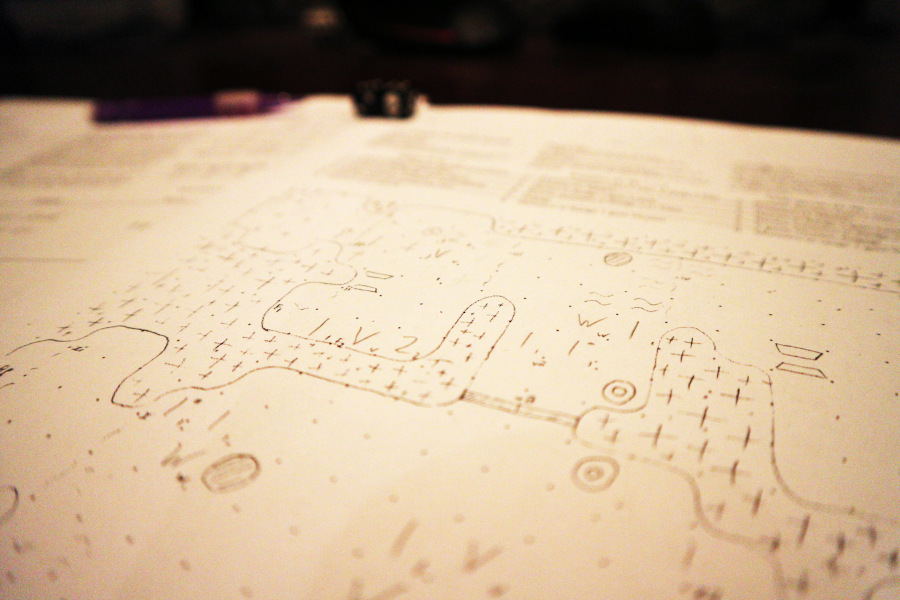 What does it cost?

What do I get?

Pencilquest, in all its comfortable 26-page PDF glory. It comprises:

If you do not see the payment embed above, you may need to disable script blockers. It may take up to two minutes to receive your files. If you are a Gmail user, please check your spam folder! Several game e-mails have ended up in there. To download your files, click the "View product" link (button) in the e-mail you receive. Mail pt@andrewbackhouse.com if you have any problems.

You may prefer to shop directly on Gumroad's site.

Pencilquest is also available on 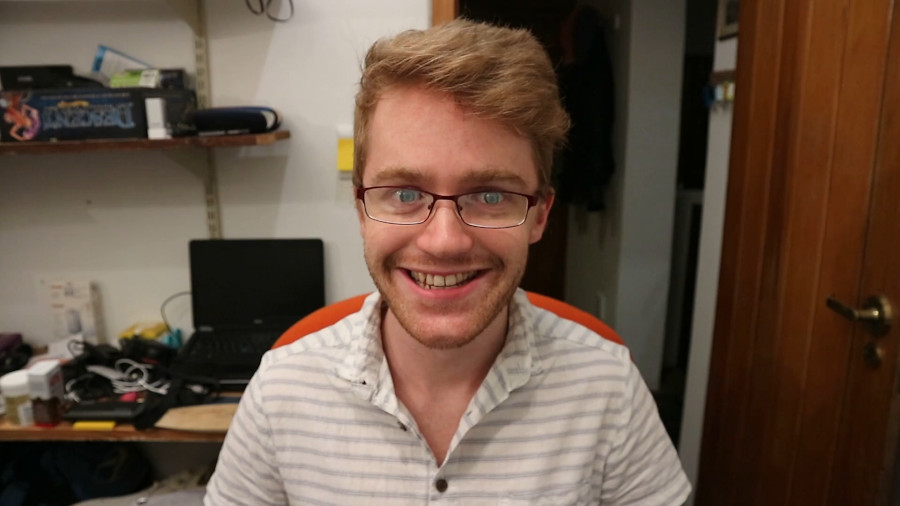 Thanks a bunch for your interest, and I hope you buy Pencilquest, because it's hot.

I want to hear from you! E-mail me at pt@andrewbackhouse.com.

I'm running Google Analytics on this page to examine traffic. If this offends you, I'm really sorry—please feel free to block Javascript. Pencilquest was made almost exclusively using free and open source tools. Huge thanks to the LibreOffice developers! Site fonts are Noto Sans by Google and Annie Use Your Telescope by Kimberly Geswein. Calligraphr.com used in document development.